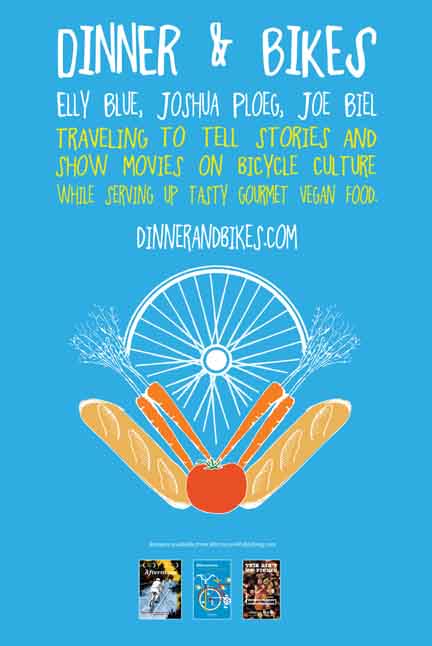 Please consider coming to a great evening of new bike films, dinner, and wine tasting in Winters next Tuesday! It is a great set of films–I previewed some, and really like the community-centered stories they tell. I’m hoping this event can continue to help get more energy around promoting biking in Winters, and appreciate your support! Plus proceeds will benefit the playground rebuild. Spread the word!

Dinner and Bikes is coming to Winters! This traveling show will visit Winters on election day, Tuesday, June 7th at 6pm at Berryessa Gap Tasting Room in Downtown Winters.

The evening will feature good food, wine, films, and discussion about how we can keep Winters a safe and fun place to bike, walk, play, and live. Plus, it will be a fundraiser for City Park: The Next Generation, the wooden park rebuild.

The night begins with a gourmet vegan, gluten-free meal by chef Joshua Ploeg and wine tastings from Berryessa Gap Winery. We will then watch a series of short films made by Joe Biel and Elly Blue about people using bicycles to make their lives and communities better. With the movies as inspiration, we will explore our questions, ideas, and visions for our community in Winters.

Tickets are $20 in advance and available at Berryessa Gap Tasting Room or http://tinyurl.com/bikewinters. Tickets day of the event are $25. Proceeds from this event will go to City Park: The Next Generation.

Joe Biel is the co-producer/director of Groundswell, the director of the feature documentary Aftermass: Bicycling in a Post-Critical Mass Portland as well as over 100 short films. He is also the author of half a dozen books, including Beyond the Music. He founded Microcosm Publishing in his bedroom closet in 1996 and has since published over 350 nonfiction books, zines, and movies. He lives in Portland, Oregon.

Elly Blue is the co-producer/director of Groundswell and the author of Bikenomics: How Bicycling Can Save the Economy and Everyday Bicycling: How to Ride a Bicycle for Transportation (Whatever your Lifestyle). When she isn’t writing, she is the marketing director of Microcosm Publishing, producing books and zines about all aspects of feminism, self-empowerment, and bicycle transportation. She lives in Portland, Oregon.

Joshua Ploeg is the the traveling vegan chef. When not touring the world, he is a personal chef and delighter of secret cafe goers in Los Angeles. His eighth and newest cookbook is This Ain’t No Picnic: Your Punk Rock Vegan Cookbook.